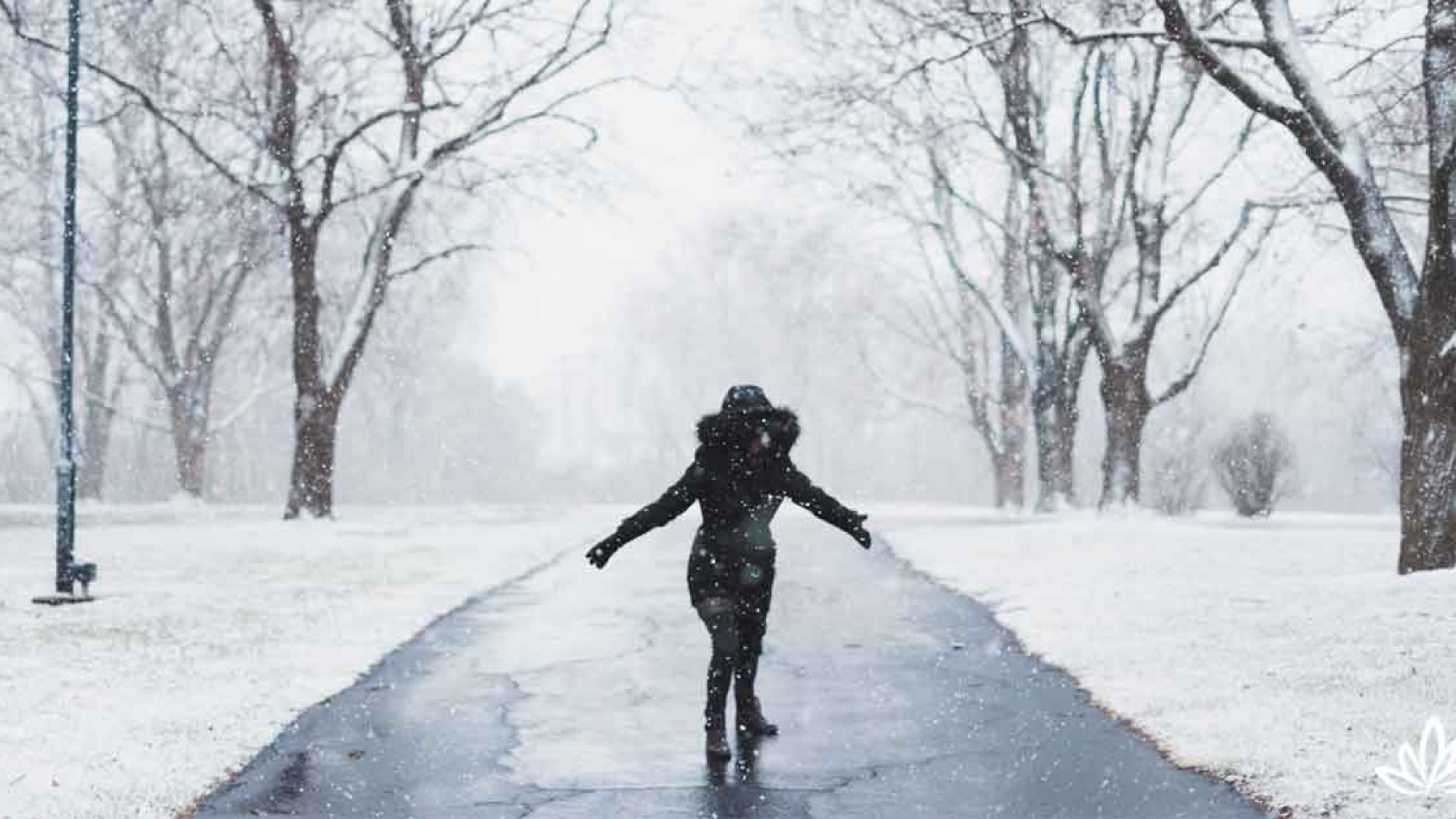 The winter solstice has been celebrated for thousands of years by people from all over the globe. Every year in the Northern Hemisphere (on Dec. 21 or 22) and the Southern Hemisphere (on June 20 or 21), the sun appears to stand still at the Tropic of Capricorn, shinning directly overhead at 12 noon, before reversing its direction. At the winter solstice, the balance of dark and light tips, and the sun begins a return trip that promises such good things in the months ahead…new life, growth, warmer weather, and those beautiful spring flowers that push their way out of the soil like clockwork and bring a smile to your soul.

The days leading up to the winter solstice might be dark and cold, but this is actually nature’s way of helping us to come together as a community and focus on spiritual rebirth. It’s always easier to work with Mother Nature, so take advantage of these shorter days and dedicate time to feeding your spirit, nurturing your soul, and reflecting on your journey over the past year—you can then set your intentions for the year ahead and celebrate the return of the light.

People have been celebrating the winter solstice for thousands of years—and yet, while these winter solstice traditions and rituals are diverse and unique, each is centered around the universal theme around light and renewal. You may already have your own winter solstice rituals in place, so you can clear away past trauma, find strength in the present moment, and pave the way to the future of your dreams…but what if there’s a tradition from a far away ancient civilization or culture that can help you move to the next level in your spiritual journey? Keep reading for winter solstice traditions and rituals around the world and different ideas you can use to incorporate elements of the celebration into your own practice.

Winter solstice rituals from all over the world

The Labyrinth of Light in Vancouver, BC

Every year, Vancouver residents and visitors join together to celebrate the winter solstice at the Labyrinth of Light, an evening of processions, music, and art performance. The event is organized by the Secret Lantern Society and attendees are invited to wander through intricate light mazes (created with 700+ beeswax candles!) for a meditative experience that fosters relaxation and encourages self-reflection.

The concept of a “labyrinth of light” has long been used in cultures around the world for meditation and prayer on the winter solstice. Vancouver’s interpretation, with its self-guided ceremony, helps attendees to release old attachments and envision new possibilities for the future while the darkest night of the year gives birth to a new season filled with hope and light.

Create your own maze of lights
If you’re not able to make an impromptu trip to Canada, you can still capture some of the magic that happens at the official Labyrinth of Light by creating your own “mini” version at home. On the night of the winter solstice (Dec. 21), setup rows of beeswax candles throughout your home or backyard; if you have young children, or are nervous about having so many candles burning simultaneously, pick up some flameless candles at your local craft store or Amazon.

Winter solstice at Stonehenge in England

Stonehenge is synonymous with the summer and winter solstices because of the ancient structure’s precise alignment with the sun’s movement, as well as the fact that it is a bucket list item for so many.

Every year, thousands of revelers make the journey to this sacred place of worship to witness the mid-winter sun set perfectly between the two upright stones of the Great Trilithon at dusk. For those lucky enough to witness the magic of Stonehenge in-person during the winter solstice, there will be lots of activities going on around you: dancing, singing, Druic ceremonies, and Pagan celebrations, to name a few. The grounds open at first light the next morning (December 22) to allow thousands of druids, pagans, and other devotees to celebrate the sunrise in a spiritual, respectful manner (which does not involve activities like drinking alcohol, playing loud music, or using fireworks).

Say a little prayer (for you and for the Earth)
The weather outside might be frightful, but that doesn’t mean that there’s nothing going on below. Think about your own life and what might be lying dormant at the moment, and then envision what may bloom a few months from now.

A Prayer to You and the Earth at Yule
Cold and dark, this time of year,
the earth lies dormant, awaiting the return
of the sun, and with it, life.
Far beneath the frozen surface,
a heartbeat waits,
until the moment is right,
to spring.

The Dōngzhì Festival in China

The Chinese winter solstice Dōngzhì festival is a major winter solstice and holiday in East Asian culture, dating back thousands of years to the Han Dynasty (206 BC–220 AD). Dōngzhì festival revelers celebrate the time when winter’s darkness begins to give way to light by gathering together with family for celebratory meals and trips to temples to honor ancestors.

The concept of balance is integral to East Asian philosophy of Yin (positive) and Yang (negative) and its influence can been seen in the Dōngzhì festival: at the Winter Solstice, Yin is at its peak and will gradually disappear, while Yang will become stronger from that day forward.

Cook: family meals are central to Chinese winter solstice celebrations, so cook up (or order from a specialty store) a hearty, nourishing meal to share with family and loved ones. Traditional foods served during the Dōngzhì festival include tang yuan (glutinous rice dumplings) and lamb dumplings.

Yalda, or Šab-e Yaldā, is an Iranian festival held on the “longest and darkest night of the year” – the winter solstice. Yalda means “birth,” and Yalda Night is viewed as the birthday of the sun god Mithra and the victory of light over dark.

During this ancient festival, which originated prior to the advent of Islam and at a time when the majority of Persians were followers of Zoroastrianism, people were advised to stay awake most of the night and gather in the safety of groups, while sharing the last remaining fruits of summer. The same Yalda winter solstice customs are carried today, with families gathering together, eating, drinking and reading poetry (Hafez) throughout the evening to pass the darkest night of the year with laughter and joy. Iranians believe that those who begin winter by eating summer fruits (especially pomegranate and watermelon as the red in these two fruits symbolizes the crimson hues of dawn and the glow of life) will not fall ill during the cold season.

Read: Hafez was a 14th-century poet in Iran whose mystical love poems express the ecstasy of divine inspiration. Join people in Iran as they open the Divan of Hafez to a random page and read the poem on it, which is believed to be an indication of things that will happen in the future. If you can’t locate a copy of the Divan of Hafez in time for Yalda, don’t stress! In addition to the Kindle edition on Amazon, both Google and Apple have apps available in their stores.

Peru, located in the Southern Hemisphere, celebrates the winter solstice on June 24. Inti Raymi (Quechua for “sun festival”), which takes place on the solstice, is dedicated to honoring the Incan sun god, Inti.

Prior to the Spanish conquest and colonization—which had a devastating impact on the Indigenous Peoples of South America—the Incas would fast for the three days leading up to the winter solstice. Before dawn on the fourth day, they would travel to a ceremonial plaza in Cusco and wait to see the sun rise on the horizon. When the sun appeared, the Incas would crouch down before it, offering up golden cups of chicha (a sacred beer made from fermented corn) and hundreds of animals (mostly llamas)  in sacrifice.

When preparing for the ceremony, the Incas would use a mirror to focus the sun’s rays and ignite a flame that would be kindled into a fire. Sadly, after Spain conquered the Incan civilization, Inti Raymi was banned. However, modern society has revived the ancient festival (sans the live animal sacrifices) and the yearly re-enactments bring thousands of people from all over the world to Cusco, the ancient Incan capital.

Dance!
Traditional Incan music and dance are a big component of the Inti Raymi celebration, so why not watch the YouTube video below and try the moves out yourself?

In Japan, the winter solstice is less a festival than a traditional practice centered around starting the new year with health and good luck.

During this sacred time of year, farmers welcome the return of the sun’s nourishing light after a long, dark winter. To encourage the sun’s return, people create massive bonfires that burn on Mount Fuji every December. In addition to ensuring the earth gets off to a healthy start, Japanese winter solstice participants also focus on healing their own bodies by taking warm baths scneted with yuzu, a citrus fruit that is believed to ward off colds and facilitate strong health. If you are lucky enough to be in Japan during Toji and you happen to stop by a public bath or hot spring, you’ll notice that yuzu has been thrown into the water; most-likely, you’ll also be served kabocha squash during a winter solstice meal in Japan, as it is thought to bring luck.

Relax in a nice hot bath
After all the praying, reading, cooking, and dancing you’ve been doing in celebration of the winter solstice, perhaps it’s time to wind-down and help your body relax. The Japanese use yuzu in their baths during the winter solstice, but you can use whatever essential oil you find relaxes you (lavender is always a good choice when you want to rest). As you let your muscles relax in the warm bath, focus on letting go of anything negative that you’ve been carrying around all year…and when you’re ready to rejoin the world, pull up the bath plug and watch as all that heavy energy whisks away down the drain.

Additional materials for the winter solstice 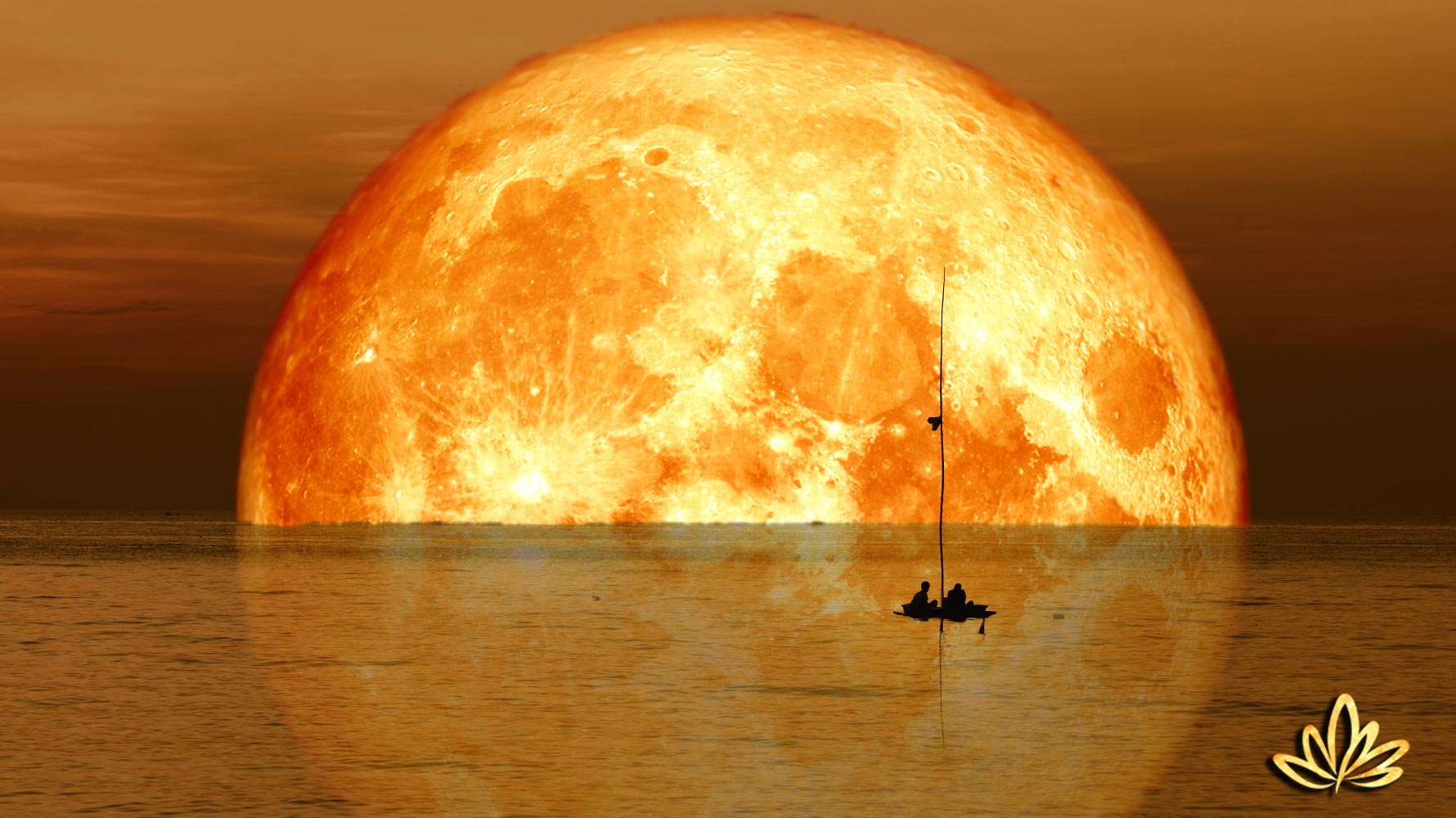 August’s Sturgeon Moon (aka Green Corn, Fruit, Barley, Grain, and Red Moon by other tribes) is the last supermoon of 2022. It is a time for reflection and gratitude for the many ways in which nature provides all of the essentials to sustain life in all its diverse forms in every season on our home […] 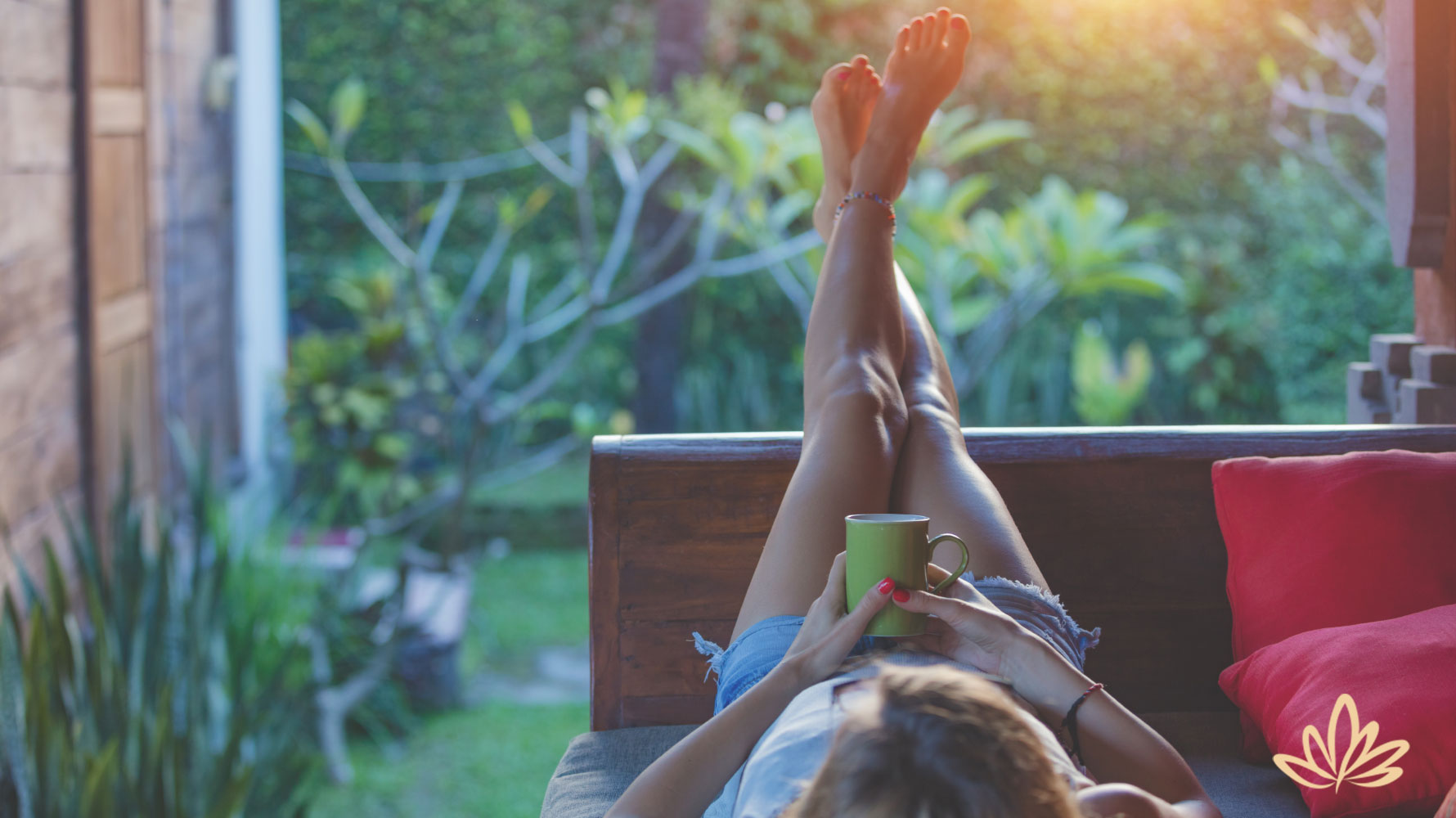 The Cycle of Light and Dark

I wake in the early morning hours, when I can still see the stars, to bring in the light of day with meditation. It has always been important, in all the ancient spiritual traditions, to greet the dawn of a new day, to give praise for having come through the darkness yet again. The ancient […] 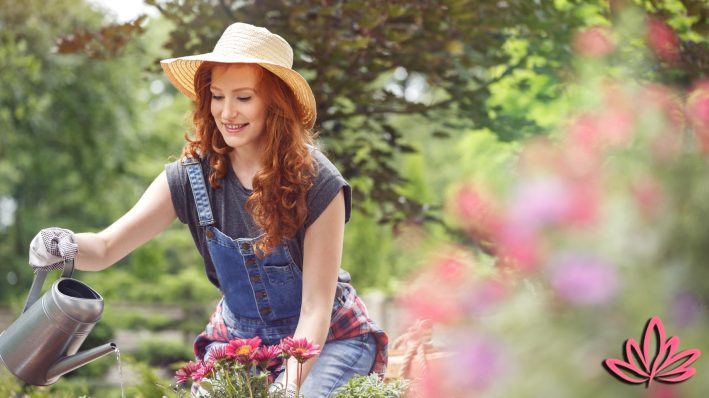 Spring is just around the corner and the flowers have gotten the word! At the vernal equinox, the equilibrium is perfect—night and day, light and dark are balanced on the brink of change. The shorter days of winter are past and the longer days of summer are approaching. Just as the natural world is poised [...]