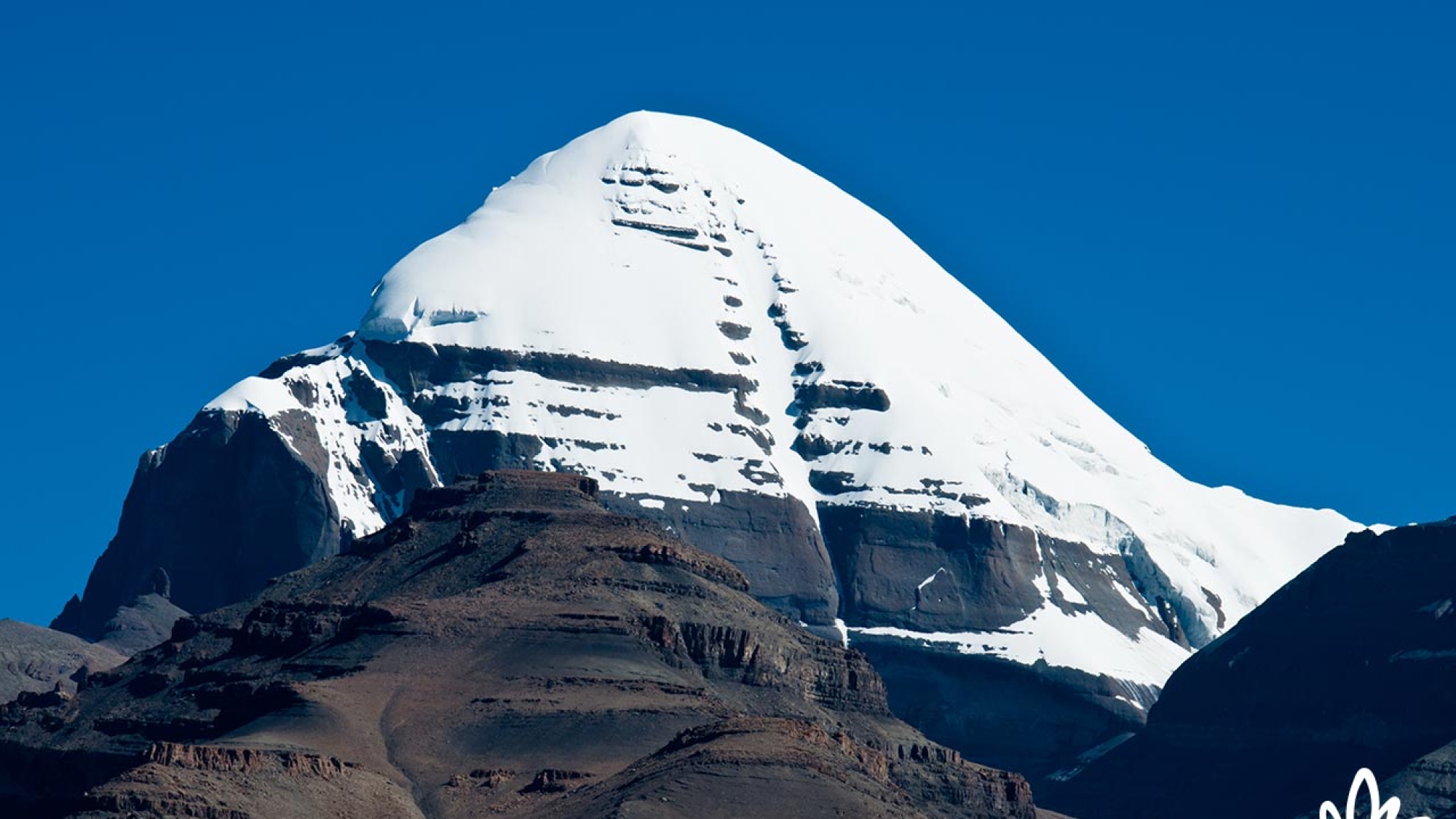 For many thousands of years Mt. Kailash has been the most venerated site on Earth, visited by pilgrims not to climb it, but to undertake the 32-mile ritual journey that circumnavigates the base of the mountain. Sacred to billions of people of four religions, it is the least frequently visited holy spot because of its remoteness in western Tibet. It takes weeks of hard and dangerous travel to reach it, the weather can be treacherous, and all supplies for the whole journey are carried by the pilgrims. I must admit that, for all the mountain climbing I have done in the region, I never approached Mt. Kailash, preferring, instead, more popular climbs areas like Mt. Everest.

Mt. Kailash stands alone, apart from the nearby Himalayan range, and has a distinct shape, with each of its four sides pointing to a cardinal direction. Its tip points to the heavens and marks the mountain as the Axis Mundi—the Vedas call it the very center of the world—which runs through the center of all the planes of creation. It’s considered the central point around which the cosmos rotates. Hindus, Buddhists, and Jains (like my accountant) believe it is to be the gateway to heaven.

Four rivers flow down the slopes in the four cardinal directions: the Indus River in the North; the Brahmaputra in the East, the Karnali in the South (which drains into the sacred Ganges River), and the Sutlej that flows West. Each face of Mount Kailash depicts an emotion and is associated with a precious substance: north (gold) is forbidding; south (lapis lazuli), always snow covered, is splendor; the west (ruby) is compassion; and the east (crystal) is mystery. The snow that falls on the mountain creates the symbol of Om, the sacred symbol of Hinduism.

At the base of the mountain is the pristine turquois-blue and freezing fresh water of the round Lake Manasarovar. The name is a combination of “mind” and “lake” and means Lake of Consciousness and Enlightenment. Hindus say that if you drink its water after one circumnavigation of Mt. Kailash, at death you will go to the abode of Shiva, cleansed of all sins over many lifetimes. Near this lake is another, called Rakhas Tal, a saltwater moon-shaped lake whose name means Lake of Demons.

In fact, no one has ever climbed this mountain, with the noted exception of the ancient Tibetan yogi named Milarepa, a poet saint who challenged the Bonpo priest, Naro Bon-chung, to scale and summit Kailash. When Milarepa magically won the contest, Buddhism replaced Bonpo as the main religion of Tibet.

Others have tried but failed to summit the mountain. Siberian trekkers who dared to go beyond a certain point on the mountain suddenly became decades older, and all died of old age when they returned from the mountain. Ancient texts say no mortal is allowed to walk on top of Mt. Kailash as it is the home of the gods. As one climber, and the most famous of all, Italian Reinhold Messner, said, “If we conquer this mountain, then we conquer something in people’s souls.” As of 2001, the Chinese government has prohibited all climbing on the mountain.

It is not the highest mountain, standing 22,000 feet tall (Mt. Everest is 29,000 feet high), but it is the earthly manifestation of the spiritual center of the universe for Hindus, Buddhists, Jains, and those who practice Bonpo, the indigenous religion of the area.

Hindus revere Mount Kailash as Mt. Meru, the abode of Lord Shiva and Mother Parvati, and a pilgrimage there is considered the ultimate one on earth, known as Kailash Parikrama. The striations on the South face of the mountain resemble a stairway, which is thought of as the spinal column through which the feminine power of the kundalini rises. The Vedas and the Puranas say the mountain, Kailash Parvat (parvat means mountain, parvati means “daughter of the mountains), is the link between heaven and earth.

Jains call the mountain Mt. Asthapada, the place where Rishabhanatha, their founder and first Tirthankara (ford-maker, a savior who takes you across life’s stream), attained liberation.

Tibetan Buddhists call it Kang Rimpoche, the “Precious One of Glacial Snow,” and see the mountain and its four rivers as a gigantic mandala. Legend has it that Mt. Kailash is the abode of Padmasambhava, who brought Buddhism to Tibet, and is home to Demchog, the tantric meditational deity. Tibetan Buddhists journey around the mountain in a clockwise direction and call their circumnavigation Kailash Kora. The Tibetan word neykhor means pilgrimage, “to circle around a sacred place.” The goal is to use the pilgrimage to go beyond your attachments and sharpen your focus on the divine.

Some devotees do full body prostrations around the entire mountain, inching along the ground, taking three weeks to a month to complete their circuit. Circling the mountain without prostrations takes three days, but some practice a secretive breathing technique, called Lung-gom, that can supercharge them to make it around in only one day. The most challenging aspect of the kora is the Doma La pass, at 18,500 feet above sea level.

In the pre-Buddhist Bon religion, Mt. Kailash, which they call Tise, is the abode of Sipaimen, the Sky Goddess, and is the center of all tantric rituals as the spiritual seat of power. Tonpa Shenrab Miwoche, who founded the shamanic Bon religion, is said to live there. Bonpo pilgrims walk in a counterclockwise direction around the mountain.

Like other sacred sites around the world, there are mysteries surrounding Mount Kailash. There are UFO sighting, especially above Lake Manasarovar. There are carvings on the mountain that are almost 250 feet high, and no one knows who made them. Some think Mt. Kailash is actually a manmade pyramid since its sides are so steep and perpendicular, and consider it the center of all activities that embrace the paranormal.

Tune into Mount Kailash when you need centering. Fill yourself with its majesty, serenity, and its spiritual magic.

At the centre of the earth,

There stands a great mountain,

Lord of snows, majestic, rooted in the sea,

Its summit wreathed in clouds:

A measuring rod for all creation.”

–from the poet Kalidasa

While physically traveling to Mount Kailash could be a hard and arduous task – nearly impossible for most – you can visit and experience its majesty via the astral plane. You just need to learn the skill.

If you’d like to learn that skill, you might consider joining our bestselling Astral Wisdom course. It will give you the wisdom and skills necessary to travel to location such as Mount Kailash, Newgrange, Karnak, Jerusalem, Glastonbury, Mount Shasta, or any other spiritual location on this Earth or places beyond.