It’s No Myth: Vampires Are Among Us! 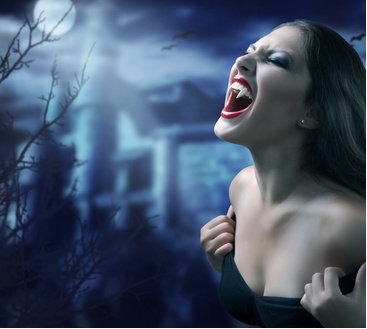 Our culture today is obsessed with vampires! You don’t have to go far to see the latest trendy vampire story. Turn on your television, open a magazine, or walk by the latest billboard on the street…check out some of the top-selling books and yep, vampires are among the storyline subjects! From hit tween television series like The Vampire Diaries to adult drama on HBO’s True Blood to big screen blockbusters such as the Twilight series to Tim Burton’s upcoming flick, Abraham Lincoln, Vampire Hunter, these blood-sucking creatures are everywhere these days!

What is it about vampires that makes them so trendy and captivating?

The reality is, our society has been mesmerized by vampires for centuries. Vampires are not a new phenomenon or trend. From Bram Stoker’s classic 1897 novel, Dracula, to more modern takes like Anne Rice’s popular The Vampire Chronicles, stories of these nocturnal blood-sucking monsters have fascinated and entranced our culture for years and years. Early mythologies and folklore of vampire legends date back centuries to a surge of vampire superstition originating in the Balkans and Eastern Europe and trickling into Western Europe. This vampire superstition in Europe actually led to mass hysteria and in some cases, corpses being staked and people accused of vampirism. The interpretation of the vampire by the Christian Church and subsequent vampire literature, such as an 1819 novella by John Polidori entitled The Vampyre, inspired later works, such as Bram Stoker’s Dracula, which is arguably the basis for most of our modern vampire fiction.

People gravitate towards a tragic story and no story is more tragic than that of the vampire – former human beings in normal society, often victims themselves of tragedy or sad circumstance, and unwillingly made into vampires, forced to roam the night, inflict pain on others and take their own victims simply to “survive”. Most people want to root for the vampire and wish them to have a soul and heart. Recent movies and television shows depict vampires trying in earnest to fit into modern society, despite their differences and challenges.

Our society has an obsession with the unknown and a fear of mortality. The vampire lives on forever in immortality so it is a topic that entices our richest imaginations and dreams.

Vampires represent the things our society is afraid of: danger, death, sexual desires, and power. The vampire is a lonely creature, an outsider, and many people identify with the feelings of being the outsider amidst society. Watching how the vampire makes a life for him- or herself gives society hope that we too can find a way to move forward and live, despite any struggles to conform.

The vampires you see on-screen may also be a metaphor for the vampires in your own life, the energy vampires who drain your soul and spirit and suck you dry. These are the real-life vampires to watch out for, who can cause actual harm and damage to you. I’ll be talking more about energy vampires on my Hay House Radio show this Wednesday, August 8, at 5:00pm EDT.

Vampires are the one trend that has outlasted the test of time and do not seem to be going out of style anytime soon. It’s fun to enjoy these supernatural creatures in books and on-screen – Just try to keep the real life energy vampires out of your life and enjoy their fictional counterparts as pure entertainment!