Mary Magdalene and the Essence of the Divine Feminine 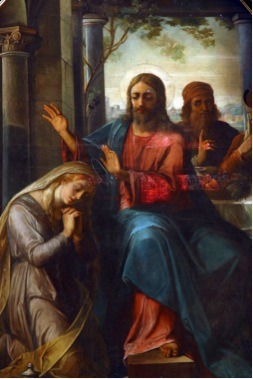 July 22nd is the Feast of Mary Magdalene and a good time to celebrate the archetype of the Divine Feminine. Actually, you could call the Magdalene the first feminist as well as the first and foremost of the disciples. Mary Magdalene is one of my spiritual guides, and a powerful presence!

Forget the story you heard of her being a prostitute. Even the Vatican has recanted on that one, although it took them until the 1960s to admit her image as a prostitute was not supported by the text of the Bible. An early pope, Pope Gregory the Great, mixed up Mary Magdalene with another New Testament woman who was a reformed prostitute, thus prompting the legend.

Serious researchers have been busy with various early Christian Gnostic texts, called “codices” that date to the second century. One fragment from a surviving codex is from the Gospel of Mary, where she tells the disciples about a vision she had of Jesus. Peter questions that Jesus would “speak privately with a woman and not openly to us?” Levi tells Peter to cool his hot temper and stop railing against Mary like an adversary—“If the Savior made her worthy, who are you indeed to reject her?”

Indeed, the rock upon which the Church was built, Peter, and the men who changed the Gospels and the New Testament to suit their own purposes all rejected women. But it’s starting to be clear that Mary Magdalene was an important figure among the disciples, that she may have been a wealthy woman whose funds supported the ministry of Jesus in Galilee, and that she played a pivotal role as the first witness to the Resurrection. It also seems to be true that she went to live in France after the crucifixion and died there after many decades spent as a hermit in a cave.

Of course, the big question raised by Dan Brown’s bestseller The Da Vinci Code, remains unanswerable—whether or not she was the wife of Jesus and bore him a child, making her the Holy Grail, the depository of the blood of Christ. There are those who believe the Wedding at Cana was their wedding, and that Jesus supplied the wine, as was customary for the groom.

As time goes on, we will have more information from codices like the Gospel of Thomas, the Gospel of Philip, and the Acts of Peter. Mary plays an important role in all three, and is often seen as the only one of the disciples to ask intelligent questions instead of being confused. It’s said over and over that Jesus loves her more than any of the others because of her spiritual understanding.

Rather than being the sinner who was redeemed by the love of Jesus, Mary comes off as one of the leaders of the early Gnostic Christians. But the Church is still reluctant to grant her too much of an uplifted status. If indeed Mary was such a potent female among the disciples, the traditional argument for an all-male priesthood gets shot down, and it becomes clearer that the role of women like Mary was eliminated as much as possible from the Bible.

One fascinating study mentions that the Hebrew word the Essenes used for their priestesses was Kedushah, which literally means feminine holiness, or holy woman. Unlike the Essenes, mainstream Judaism did not permit women to be priests. In mainstream Judaism, the term Kedushah is a slur against women who would enter the priesthood, conveying the idea that such a woman is a harlot. So the word means both a holy female devotee and harlot. We see where the confusion about Mary Magdalene could have come in.

My hope is that Mary will continue to be resurrected as a holy woman, the essence of feminine holiness, the one who never deserted Jesus as he went through his trials. And some day, perhaps, women in general will get the respect they deserve as the true holy grails of feminine wisdom and spirituality.