Isis and Osiris: The Love Story of Ancient Egypt 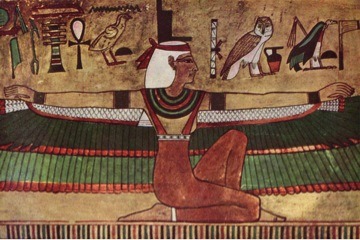 Isis was the most powerful goddess of ancient Egypt, even greater than the gods; her worship spread through the Mediterranean world and became one of the main religions of the Roman Empire. Like so many goddesses, she had a long history. We’re not even sure that Isis is her original name, as Egyptian hieroglyphs didn’t include vowels. What we do know is that she came to embody so many of the qualities we seek that she is called “The One Who Is All” and the “Lady of Ten Thousand Names.”

Born of the Geb, the god of the Earth, and Nut, the goddess of the Overarching Sky, Isis held both heaven and earth in balance. She is a moon goddess who gave birth to Horus, the god of the sun; together, mother and child created all life and sustained it. She taught women to grind corn, bake bread, spin flax, weave cloth, and, perhaps most importantly, she taught them to tame the men so the women could live with them! Among her many attributes, she was also the goddess of medicine, healing, fertility, and wisdom.

So why was this Mother of Life also known as the Crone of Death? That title comes from what happened with her brother/husband Osiris.

Incest between brother and sister was allowable for the gods to keep the bloodlines pure. When Osiris became her husband, he became the first King of Earth. Set, their brother, was jealous and killed Osiris, sealed up his coffin and threw it in the river Nile. Isis grieved mightily, shredded her robes and chopped off her hair. Then she set out to find the body of her husband so she could bury him with proper honor and respect.

As she searched for her love, she met Queen Astarte in Phoenicia. Making a long story short, Astarte realized that Osiris’s body was hidden in her palace. Isis carried him back to Egypt and hid it in the swamps of the Nile delta while she prepared for his funeral. Her wicked brother, Set, found the coffin, furiously hacked Osiris’s body into 14 pieces, and scattered them in different directions. Searching and searching, Isis recovered thirteen of the pieces. Only his penis was missing, so she made one from gold and wax (some myths say mud or clay). Promptly inventing the rites of embalming, and with her magical powers in full force, Isis brought Osiris back to life and conceived their child Horus. Now that she was no longer grieving, Osiris was free to descend and became the King of the Underworld, ruling over the dead.

Isis is often shown wearing the symbol of an empty throne on her head, suggesting her husband’s absence and that she, herself, was the seat of the Pharaoh’s power. She carries the ankh, the Egyptian hieroglyph of eternal life. When in her funerary role, and as the protector of the dead, she is shown with wings. The ancient Egyptians believed that the Nile River flooded each year because of the tears Isis wept for her dead husband, and every year there was a ceremonial death-and-rebirth ritual.

When Christianity was trying to gain a foothold over paganism, the mother-and-child images of Isis and her son Horus in the many temples of Isis across the land were converted into images of Mary with her infant son Jesus, while images of Isis holding the body of her dead husband across her lap became Mary with the crucified Jesus.

For us today, Isis stands for qualities we all aspire to: feminine strength, deep caring about relationships, acceptance of our emotional depths, the act of creating life, and the wisdom surrounding renewal and reconnection.