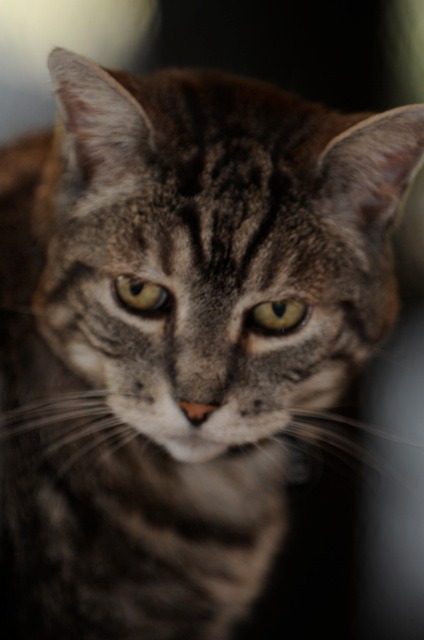 More than 10 years ago, we moved to yet another horse ranch, a sprawling 20-acre spread backing up to a nature preserve, a magnificent property covered with high grass and ancient oak trees just a few miles from the shores of the Pacific. We no sooner arrived, with our horses and dogs, than the displaced seller called, ashamedly telling us he had been forced off his property some months earlier by a restraining order sought by his ex-wife, an order that denied him access to his  children and property. He seemed resigned about all that but quite upset about a manx cat he loved that might still be somewhere on the property, starving to death.

We promptly began a hunt for the little tabby cat with no tail he described, and spotted him at dawn the next morning, running into a drainage ditch in which he had been living down by the barn. He was emaciated. The vet guessed he might be some 5 or 6 years old and recommended frequent feedings to bring him back to health.

We named him “Mr. Manx” and placed food out for him twice a day. He rapidly gained weight and, feeling more like himself, began hunting again, proudly presenting us every morning with a gopher or two twice his size – dragging them into the house through the dog door and dumping them at the base of the stairs, where I would stumble over them in the dark as I came down in the morning.

As summer moved into fall and the weather cooled, Mr. Manx let it be known that he could easily give up his raucous outdoor lifestyle and move indoors, explaining that his favorite activity wasn’t really hunting, but napping: that cat could nap anywhere at the drop of a hat. He ingratiated himself with the house cats and set a sleeping example no other acquaintance of mine has ever matched – he could sleep so well, he could almost sleep standing up. No matter where you turned that first winter, he’d be asleep nearby: always finding a patch of sun, at the base of the glass door or on a windowsill, or protected from the wind, sunbathing on the upper deck. I was going through a difficult menopause those first years Mr. Manx joined our family, unable to sleep much at all myself, and I used to imagine that the cat was sleeping for me.

One day I realized that Mr. Manx was no longer thin and starving; in fact, he was overweight. Seriously overweight. We realized that he had developed an eating disorder from his days of near starvation; that darn cat just couldn’t stop eating, fearing that food might one day again become scarce. He continued to gain weight until his belly touched the ground and I could no longer lift him.

About the same time, I admitted to myself that my dream horse ranch had a fatal flaw. During the exciting days of escrow and purchase, I had met with several horse trainers who all praised the beauty of the land but, once we were on it, we found that it was really too steep for horses and humans alike. As one fencer put it, “Lady, you’ve got yourself a pyramid here, not a horse ranch.” The house was at the top of a mountain and the horses and barn at the bottom of a draw, and in-between was a no man’s land of rolling oak forests, hiding wild turkeys and coyotes and bobcats and the occasional mountain lion that would stand and stare as I fed and mucked the horses alone at night, giving the twilight an eerie quality.

Never one to let the grass grow under my feet, I again took up the arduous search for yet another perfect ranch property and, many months later, stumbled on one just a few miles away. By that time, Mr. Manx had become a key member of our family and I obsessed about the difficulty of moving him, knowing that cats don’t move easily. But Mr. Manx had other ideas, and jumped in my car the day of the move, telling me that crating him wouldn’t be necessary, he was ready to go. At the new ranch, he took over the kitchen and it was impossible to sit for a meal without having that 30-pound cat at your back, sharing your chair with you. He was especially fond of reading with you late at night and loved Seinfeld reruns; they were his personal favorite.

That ranch was the last of our properties that Mr. Manx hunted: when we moved from there, he announced he had retired from hunting and sought a promotion to full-time housecat, one that he surely deserved.  When we moved on, first to Santa Barbara, where we briefly flirted with being citified, which worked not at all, he slept on the deck, totally disregarding the multi-million dollar view of the city, the mountains, and the ocean just below.

He much preferred our next place in the Santa Monica mountains of Malibu, another grand ranch at the end of a long single lane along a cliff, with incredible valley and ocean views and bevies of butterflies hovering nearby. This time, the bobcats and mountain lions brazenly came right up to the house, taking your breath away, and Mr. Manx elected to live totally inside, only venturing out into the special cat cage we constructed for him that had its own oak tree for his napping pleasure. It was at this house, an amazing two-story French country home set in a meadow with its own lake full of frogs that serenaded you at night, where the horses roamed free, that Mr. Manx began the practice of traipsing around, especially late at night, singing a plaintive song, sounding not happy but not unhappy either, just using his voice and keeping it tuned up. He wasn’t fond of that ranch because I insisted on sleeping the better part of the year in a tent, way out on the edge of the cliff with the horses, quite some distance from the house, and he wanted me close by. Once I moved back in for the winter, he was happy again, and slept at my feet as I wrote my first book. He always said writing was easy, like falling off a log, but I never found it so.

The years went by and I began to think Mr. Manx immortal, never aging, always ready to help me write a paragraph or two, eat lunch, or take a nap. But he died suddenly this evening, with no warning whatsoever. He was having trouble breathing as he was raced to the vet, who declared Mr. Manx quite old, geriatric really, and already in the throes of moving on. He seemed unperturbed by all the fuss and quietly expired, with as little fanfare as he had lived. The moment he left his body, I could feel his enormous spirit everywhere, filling me and then the space around me, no limits to him now as he expanded.

What is it about cats that makes them think they are ageless, that allows them to spring effortlessly from floor to kitchen counter if there’s tuna anywhere to be found? Don’t they know they’re elderly and should be on a walker or at least be carrying a cane? What is it about cats that allows them to enjoy every moment of every day, totally present, never worrying for one second that they’re getting old or fat, as Mr. Manx was for sure, or wrinkled or infirm?  Always enjoying every second of every day, the breeze, the sights and the sounds, and only wanting your company, to be with you watching the setting sun.